The game also has controller support.

Holy moly.  That was fun.  Very fun.  I'd recommend it highly to anybody

a friend of mine recorded it and found the game very good, he made a video of the game

I'm from Brazil sorry for the mistakes

the version that my friend recorded is old

You know, despite me being too dumb to figure out the big swamp room, this is still my game of the week.

Thank you so much, a full play-trough is really cool. Btw we've removed the lily-pad from the large marsh now, so hopefully no-one else will get confused.

Looking forward to seeing what's next for you. The gameplay felt really good.

Thanks fam, means a lot.

Like the graphic and stuff, but I have to say it gives me a bad game experience. For example the foreground blocks your view thus you can't see enemies, and the character gets damaged during dash and stuff. Couldn't even make it to the second boss. And there are bugs too, like I got teleported to the wall when I first got the knife.

Hi, thanks for the feedback. We've didn't know the foreground elements were such a big issue for some players, we'll try to reduce them. Thanks for pointing out the knife teleporting bug, I'll see if I can fix it.

As for taking damage during dashes I'm not quite sure what you are talking about.  You don't have invincibility after the dash, maybe that's what's tripping you up.  You could maybe try playing on a lower difficulty?

Again thanks for the feedback.

We just released a patch that should have addressed your issues.

Wow, that was fast. Will check it later. Thank you very much.

No problem. Hope you can enjoy the game more now.

This is  a fantastic game!

Thank you so much <3

Sorry, but the game is currently only in English.

Can i help you with something?

Guys, is there supposed to be more than one lily pad in the giant marsh room? I don't seem to have enough stamina to get from that one enemy to the stairs, and it keeps sending me to the small staircase when I die, meaning I have to redo the whole marsh to get back to the bottom of the room. It's the only thing I haven't finished, and it's killing me.

I'm so sorry to hear that. You are not supposed to be sent to the staircase at the top, rather back to the bottom. before entering the giant March there should be a path to the left, you need to go there first. Sorry for not making it more intuitive.

No problem. The issue only seems to trigger if I'm very close to the big stairs, maybe a dash-length away. I found out that if I just drown myself all the way, the restart will put me down at the bottom again.

That's great. Again sorry for the inconvenience, I hope the rest of the game made more sense.

Faxdoc, for curiosity: Your game have controller support?

Yes. The game is a bit more difficult, but it should work fine

This is such a good game, I have just reach till the last boss (or at least I suppose it's the last, I haven't defeat it yet) and I have some critics. I played the game before the full release of this one, and I personally think that till there it was everythin perfect. However, after this "patch", I found some things that maybe could be better, specially talking about the bosses. The "gun girl", it's ok, but I think that the circle laser that it casts should be much slower, I mean, it's so fast that it almost obligates you to learn it "cast time" by heart, I play in hard difficult, but I suggest making this circle laser slower for this dificult, in "hyper" I don't see a problem with that speed. Talking about the mage (the seccond battle), I don't know if you have made any change, but I think it "bullets" are too slow, maybe you could make them just A LITTLE faster (for example, if it speed is of 10 km/h, increase it to 12 km/h).
Another point that I want to talk about, it's the particles that don't let you escape from battle, I don't see any problem with them, and maybe it only happens to me (and it's very possible), but these particles gives too much lag, if it's possible to make an option to disable these particles, it would be wonderful.
And lastly, the cleaver, there is no problem with this weapon except that ocasionally does not bring you the enemies, it happens rarely, but happens. And one more thing, is not necessary, but a map would be useful xD.
Apart of these little things that maybe could be improved, I think that this is a masterpiece, really, you did such a good game, I would talk about all the good points, such as the new amazing levels, but I would talk too much ha ha. Sorry if I don't have a good english, I'm not a native speaker, I'm from Argentina, and seeing that these type of games are not well-know in spanish community, I'll make an analisis about this, talking in depth about it and analising it. I hope you to have a nice day, thank you for sharing Ecila with us nwn.

Thank you so much, we're so glad to hear that. We just released a new patch addressing some of your issues. There should now be a setting to use a simpler visual for the barriers, as well as turning off overworld particles. We hope this is enough to prevent lag on your system. Also the laser attack is now slower on lower difficulties, about 30% so on hard. As for the cleaver not bringing back enemies, are you talking about enemies or bosses? Some bosses are immune to getting dragged, for several reasons.

Oh welcome, and thank you too, I'm happy you have heard my suggestions. And I'm talking about enemies, not bosses, if it was possible to bring bosses too it would be OP.  Rarely happens that it does not bring the enemies, but as I said, rarely, I think it's that type of bug that happens to you because of fate, in about 5 hours of gameplay I saw this bug about 2-3 times, nothing to worry too much about.
And talking about the new options, both of them work properly, no more lag barriers, thank you a lot. The reduction of the speed of the circle laser it's just perfect, not soo slow and not soo fast.

That's really fun! I've got 2 of the lights lit on the moving platform so far. I like the Zelda-esk feel.

Awesome work . if you need musics for your next game , just tell me.  I will be happy to help.

Outstanding! Loved every bit of it. Would love to see a full-length game in this style c: Keep up the great work!

no idea if this is known, but when i entered the menu, then returned to the game the controls for moevement didn't work anymore. just wasd, attacks and dash triggered, but i was stuck in place. i was playing in fullscreen and it happened when i was standing next to the table for the four energy thingies, with only the first one activated.

I did not know about this, thank you for the bug report. It will get looked into.

Fast, difficult and pleasing to the eyes, though for some reason it was alittle blurry when i recorded it (might be me). Overall very good game

Thank you. I've seen videos of this game that aren't blurry, so it's probably just you.

This was a reaaly nice game! Loved the artstyle and gameplay gimmicks.

Level design is ok, but invisible walls in certain places make it a bit hard to navigate, and I wish there were shortcuts at the end of each world branch, to eliminate some of the backtracking. Also, while the camera switch triggers work well when you're going through the level forwards, but if you're going backwards, they have a tendency to get quite awkward, to the point when you have to go completely off-screen to reach them. This only really becomes a problem if you die and enemies respawn behind you tho, so it isn't really that big of a deal.

Still, I really enjoyed playing this!

Thanks for the feedback. We've tried to adjust the level design to make it easier to get back through.

As Usual Gameplay from Z9ZGAMES Channel!!
With All Thanks to the Creator of the Game!!

even though there was no story, this game was really fun. It felt great to play and i love the style too

Thank you so much.  The teleport at 2:35 in the video was really impressive, we didn't know that was possible.

yeah that was unexpected hahahaha

Just completed it in 20 minutes, hard mode with 8 deaths. 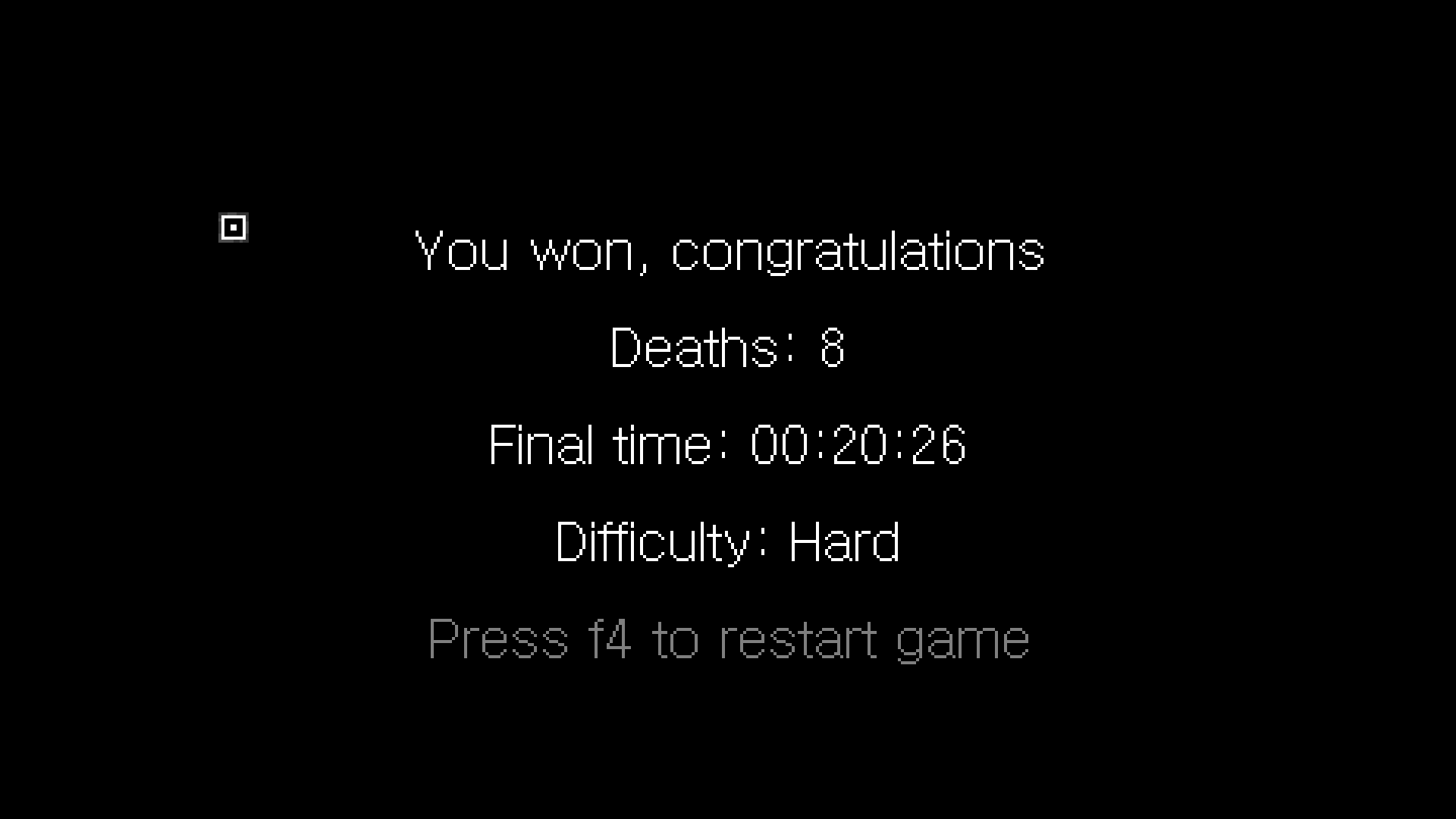 Overall very nice little game with a quite pretty art style (i followed the artist some time ago, didn't even knew they were working on this)

Only major glitch i've found is related with the cleaver weapon; apparently the game doesn't like when you try to catch too many enemies and they fly too far off bounds (it crashes so hard that i was forced to use task manager to even close the game)

I'm curious if this game is meant to be just what it is right now, or you have bigger projects related to it?

Thank you. The cleaver bug is noted, I'll look into it. As of right now we dont plan to do anything more with the game. 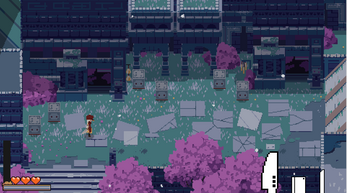 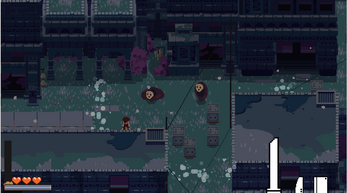 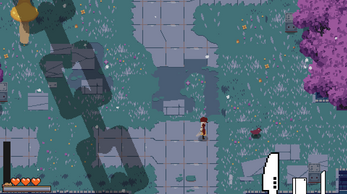