A small Bullet hell about shooting demons. made by faxdoc and nostalgiatree.

If you want to, you can support the game via paypal or kofi.

This is one of the best games on itchio imho, Love it! There is just someting so cathartic, especially with the music. Did you writhe the music yourself? Is there a way to get the music, or listen to it outside of the game itself?

I played this way more than I should have, but I finished it eventually. Loved every moment of it, great game 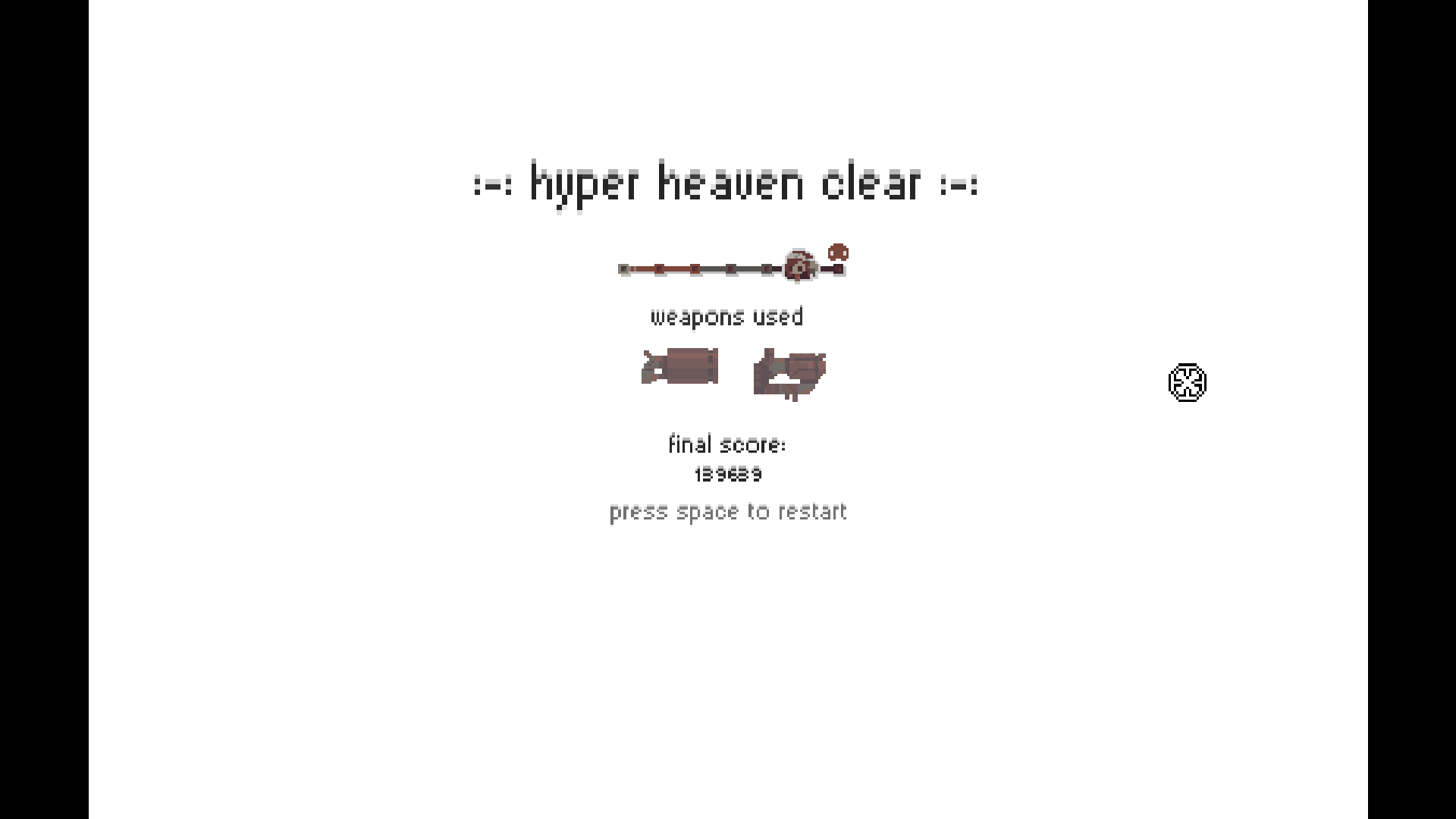 well the jump is difficult to use, hope to substitute it with dash

the allround can be reinforced a little like make it bounce once after touch the wall.

finally completed hell on hyper after like 20-30 attempts lmfao. it was legit my first attempt on anything past level 2 so thats cool ig.

guess i gotta do heaven now tho

this is one of the most fun games i've played of all time. it's simple, its difficult, and its satisfying. keep up the good work and i hope to see what you make in the future!

For some reason the game slowed down after I beat hell. I restarted it but that doesn't work either, it's not lag cause everything else works fine

That's weird, I've never about something like that before. Maybe try deleting the game and re-installing, it should keep your high-score.

GOD THIS GAME SLAPS I LOVE IT

This was a really fun game to play! Reminds of good old days of Raiden.

I really love the soundtracks in the game but I can't find them anywhere online. Is there anyways to listen to the music for the respective levels without needing to open the game.

Try to search for the songs on newgrounds. there's a credits page that can be accessed from the menu.

love it. for someone who likes both nuclear throne and into the gungeon and issac, this is like a mix of all three!! I love it. super smooth game play and very challenging. keep going guys!

Really nice game. I liked the mechanics and the fast pace. It was really challanging.

can you jump over bullets? or is jump jsut to make you go faster. btw the game is really fun and well made

thank you. Jumps only make you go faster. There used to be bullets you could jump over but i removed them since it wasn't very fun.

"Oh, they wanna see someone beat it on hyper? I got this."

Lol. just wait til you try heaven mode on hyper :>.

woah its named after me!

Hoooly... this game is dope. Great job! Following, can't wait to see more from you!

If I had one criticism, I would say it would be nice to have a little more feedback on grabbing XP orbs. As it stands they just kind of go into you and disappear. It would be sick if the screen subtly flashed blue and your character got like a little sparkle.

Just a nitpick, though. Other than that, flawless experience. You really nailed the pacing. Early game you feel like a god, then the slow trickle of weapon upgrades (the players bullet visuals getting crazier and crazier was a great choice) and the allure of seeing what weapons/bosses I'd see next kept me going. Then before you know it, the game is hard as hell and I reach a "zen" state of focus.

Sorry for gushing, I just don't see many games like this on Itch. Dope game.

Thank you so much, it means a lot. I'm glad you liked it as much as you did.

I brought "Bring me to the end" to the end of heaven mode, but nothing happened. Is there some other secret I'm missing?

No. unfortunately there's no secret  extra for heaven mode.

can i play the game with controller?

The main character is a horseshoe centrist:

"The way I see it, killing angels and demons is basically the same thing"

siri how do I boycott a free game?

Spread news about how bad the game is as far as possible. Make sure lots people know about it. That always works super well.

That's great to hear. I'd recommend the touhou games if you're looking for more of them. Touhou 8 is the best one imo.

Pretty fun and much more polished than a lot of Itch games! The bullet patterns remind me a little of the Touhou games I've been playing recently.

Default window size is really small, any way it could be made bigger besides full-screen?

Unfortunately not. If you're not playing the newest version of the game maybe try it, as the default resolution is much higher.

I really liked the game and plan to continue playing it. The only complains I have with the game are easily remedied: I found myself trying to dodge pickups (Orb things) like they were projectiles when I saw them out of the corner of my eye, perhaps the visual design of the pickups could be tweaked slightly? I also have to comment on the controls, though I see many others have done this already. Particularly, switching weapons is very difficult. Maybe the mouse wheel could control it as well as shift? A key-binding screen would solve the control problems, but I understand that is difficult to implement. The game is a lot of fun though, and the art is spectacular. Keep on developing, I'm excited to see where the game will go!

Thank you. Just did a update with some more content, and you can switch weapons with right click now. hopefully that helps.

Alright, i haven't beat the game yet, i died on the last bost i think. anyway, the gae is really cool, however there's some suggestion from me. i think its better to give right mouse button some function, its not really convortable to use both space and shift while keep you finger stay on WASD. i almost never use those 2 button on my gameplay, or maybe you could move that to Q or E

thanks. Switching weapons can be done with right click now, hopefully that helps ;).

Ok, so I beat the game on hard mode, and I have some suggestions/ideas.

1) Let people navigate the menu using arrows instead of just WASD. I spent a few seconds wondering if the game was glitchy.

2) Add some kind of animation between boss forms, the changes seem really abrupt

3) Make the bosses follow you around, instead of staying in the middle of the room. Most of the attack patterns are easy to avoid from faraway, and you can just whittle down the boss's health. Having them follow you would make the game a bit more difficult.

4) Introduce new enemies over time, instead of just throwing the player into level 1 with multiple types. It would let the player learn to differentiate them a lot easier.

5) Vary the enemies. With the current artstyle and chaotic nature of the game, I can't tell the difference between one enemy/boss and another.

6) Make the player and enemy hitboxes match. The player only takes damage if hit near the feet, but hitting an enemy's head damages them. It makes the act of dodging very jarring.

7) Add a storyline to explain why the player's hitbox is only at the feet. Maybe they have a demonic shadow that transported them to the underworld, so that's what the demons target. I don't know.

8) Add some kind of upgrade/ability tree, to make each runthrough feel a bit more unique.

9) Make the entire game 30% faster. It's not hell-ish enough. Everything is moving slowly enough that I can plan my moves in advance; make it more hectic.

This game is clearly a beta version, but it shows a lot of promise. Hope this helps.

Thanks for the feedback. If you think game is too slow/easy, maybe try playing it on a higher difficulty? we also added a second half to the game, featuring a lot more bullet-hell-y enemies and has bosses who follow you around, so you'll probably like that. if the second half isn't hectic enough at the highest difficulty i don't know what is.

Hi, how are you ? I'm sorry for my English, because I'm on Google translator (I don't speak that language), I really liked your game, and I would like to know what you want for it in the future.

Hi! I'm making a trailer of this game for a class I have at school. If it is not too much trouble would I be able to get a build of the game with no music? thank you!

I'll make one soon, just gonna finish the next update :)

Where should i link you the build with no sound? can you send me a dm at https://twitter.com/Faxdocc? 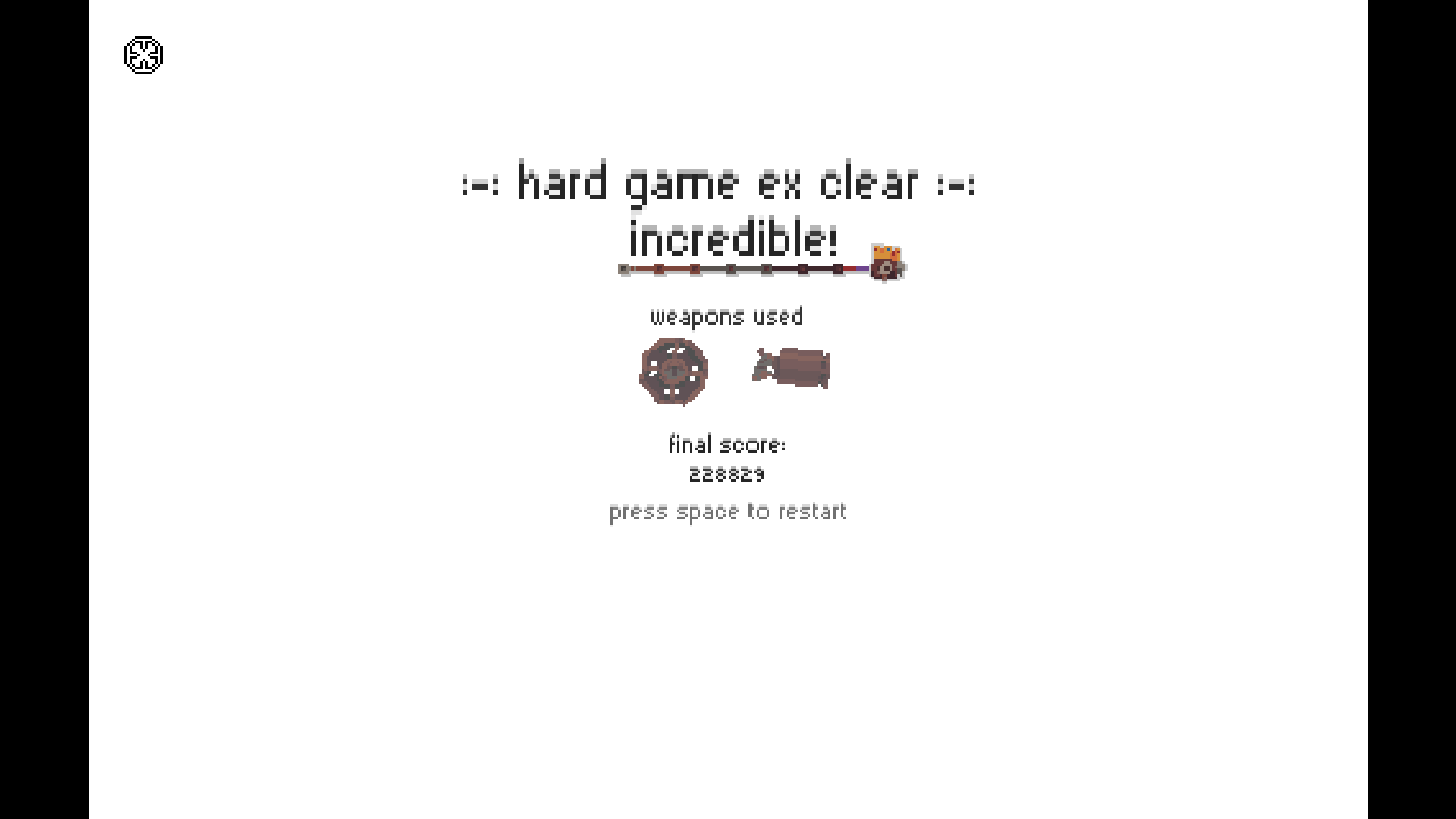 that extra final boss was rlly tough. this game was really fun to play, the whole thing was just satisfying. i feel that there was a missed opportunity in using right click as a way to fire your secondary weapon. overall very fun

Thank you. You can now switch guns with right click.

What resolution is the game set to?

I friend told me he would give me 10 bucks if I beat hyper mode in my first try. He let me do normal mode once for practice. (Remember, He let me only do it once.) Then, I saw the "Bring me to the end" gun. Thinking it would be a shortcut to the end, I picked it and the close range high damage gun... I died at the second boss.

That's really funny. the second boss on hyper is pretty impressive for a first go. Image if you pulled of a "bring me to the end" run on your first try. Thanks for the compliments.

Great game. Absolutely love the aesthetic. A few things that I would like to suggest is that enemies with different attack patterns should have some slight changes in their sprites and before attacking, there should be a small indication warning the player for the attack. Also, short range weapons are useless against bosses so they might need an upgrade.

Great game ! I really like the aesthetic, and the fact that every room start clean and end up flooded by what remains of the monsters, really adds to the environment !

Jesus that final boss was a pain in the ass !! Cool game btw even though it's too short !! May i ask what engine did you use for this project ?

Thank you, Great job beating it. are you talking about the normal final boss or the extra one? The engine is Gamemaker studio 2.

I'am talking about that extra one he's so challenging and require a high dodge skill and focusing .

And thanks for letting me know what engine you've used.

could you put the change of keys

Cool game! I like the music and how the enemies reflect in the black water! Some nitpicking:

Hi, how many updates are you planning? New bosses, story mode, maybe new enemies as well. I actually was starting the review and than the game got updated :)

There's probably not going to be any major changes to the game In the close future. Only some small tweaks and bug fixes. Right now we're focusing more on finishing rev. Maybe a 4th difficulty that makes enemies more aggressive but that's about it.

It's done. have fun.

This was an amazing experience. Incredible sound track, I just wish there was more!